MATER ADMIRABILIS (To Our Lady of Crimson Slippers) 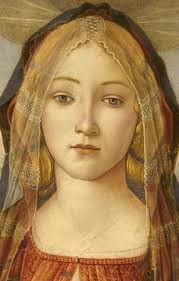 MATER ADMIRABILIS[1]
(To Our Lady of Crimson Slippers)

Our Lady, wrapt in morning,
prays all quietly,
scarcely aware that some dark prophecy
has died her sandals to a scarlet pain.

A first red leaf-flame flickers in the undergrowth of every wood –
mute herald of the whirlwind that will come.
although day will be deep with summer still
and all the panoply of autumn lies before us,
at last, however, late, the conflagration mounts;
the winter’s ash is strewn.

Posted by Catherine at 9:10 AM No comments:

FOR THE FEAST OF OUR LADY OF SNOW 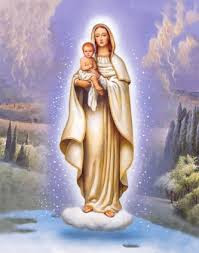 FOR THE FEAST OF OUR LADY OF SNOW[1]

Trace lightly on dark land
with thy white fingers,
Lady of Snow:
show us thy plan.

Ebony landscape awaits
the patterned years;
sketch in the architecture
of thy hope.


[1] According to tradition, the Blessed Virgin appeared to a Roman patrician named John during the papacy of Pope Liberius (352-366) and asked him to build a church on a certain spot.  It is said that her request was confirmed by a miraculous fall of snow out of season.  The church was built and endowed by John in 352 .  Initially known as the Liberian Basilica, it was dedicated to the Blessed Virgin Mary by Pope Sixtus III in 435.  It survives until this day and is known by the title of St Mary Major.  The feast of St Mary of the Snows occurs on 5 August.

Posted by Catherine at 9:01 AM No comments:

MARY STANDS BENEATH THE CROSS

MARY STANDS BENEATH THE CROSS

Gradually
we shall grow up to pain
as Mary did.

A sapling set securely by God’s hand
withstands the blast
of prophecy, holds out
through exiled dearth
through triple dark,
and in the years serene,
thrusts roots so deep that,
in the great upheaval,
one tree stands.
Fifth Dolour[1]

[1] Fifth Dolour: The Blessed Virgin stands at the foot of the Cross.

Posted by Catherine at 8:58 AM No comments: 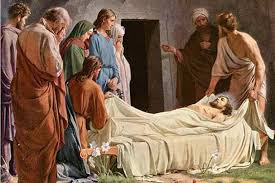 The wild mob was quieter
than this tomb crying: “Death”,
their angry shouting hurt His mother
less than Mary’s sobbing.

She cannot leave Him to this strident silence:
who cherished songs at evening,
loved best of all the music of her voice.
That three days’ wait will bring
angelic choirs
is only prophecy.
Tonight her Little One
sleeps here alone.

Posted by Catherine at 8:52 AM No comments:

FOR OUR LADY OF LOURDES 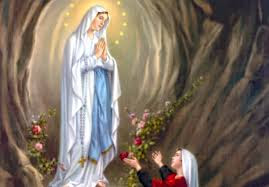 FOR OUR LADY OF LOURDES[1]

“Blessed are they who have not seen ...”[2]
but who have sought
on mountain paths
your beauty poised
above a winter rose.

“Blessed are they ...”
for life shall be for them
this only: your name
and the fair music of your smile.


[1] Lourdes, France, is a place of pilgrimage where, according to Catholic Church teaching, in 1858 the Blessed Virgin appeared  to St Bernadette Soubirous on eighteen occasions
[2] John XX:29

Posted by Catherine at 8:42 AM No comments: 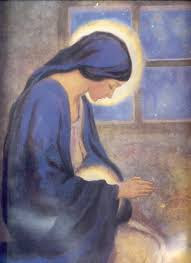 Nazareth was home to her
until an angel voice shook down the stars
and Love’s wing
shadowed the sun.

Heaven and home are one now;
exile is not.
Light dwells in her.
Wherever she walks, is God.

Posted by Catherine at 4:04 AM No comments:

SONNETS OF THE BLESSED VIRGIN MARY: THE WAY OF THE CROSS

THE WAY OF THE CROSS

The truth of Simeon's prophetic words
In Jerusalem horribly came to pass
All over Galilee the news was heard
That Jesus through betrayal captured was
Pilate washed his hands in hoped for innocence
Where now were those who had so lately praised?
Masses of people showed their ignorance
Grim heads were tossed and threatening fists were raised
With nails His Hands and Feet were cruelly pierced
The salty blood from thorn crown blinded His Eyes
After three hours of intolerable tears
The Son of God, the Son of Mary, died
Taken down from the Cross He on her knees was laid
With Mary at His burial but few of Christ's friends prayed

Luky Whittle
Posted by Catherine at 4:00 AM No comments: 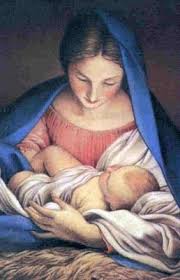 Close as the dove’s wing to her breast of peace
she folds her Child – and every other child at last
safe in the kind blue shadow of her veil
will lie content, all fright and anguish past.

And wise old men shall turn their eyes in awe
to that pure brown and almond-curve of cheek
bent motherly to teach them all the lore
of patient love they had not wit to seek.

Posted by Catherine at 3:57 AM No comments:

CONVERSATIONS OF PÈRE LAMY (based on the memoir by Paul Biver) 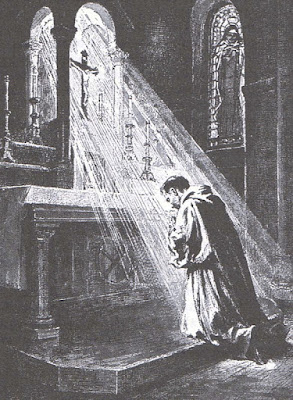 CONVERSATIONS OF PÈRE LAMY
(based on the memoir by Paul Biver)

Curé of ragpickers, often taken in
by women who came begging for layettes
to sell for wine – “I did not know it though,
they changed their kerchiefs, spoke a different way.
How could I know they had been here last week?”
“He let himself be taken in,” jeered Satan.
“He wanted to do good.  How could he tell?
I should have done the same myself,” said Mary.
She smiled with eyes as blue as periwinkle,
but nonetheless – “Please be a little careful
next time.”  He knew she was not blaming him.

One day they talked about his country childhood,
she said: “You would have killed yourself, you know,
cutting your capers in the trees.  I saved you
hundreds of times.  And then that frightful statue!
You thought to honour me by painting it –
the yellow sash!  You made me very ugly!”
She laughed with all her heart.  “But still I liked it.”
(Satan with his fox face was there and listening.
She turned to him.)  “This child sang hymns to me.
He had a fresh young voice.  I liked to hear it.
You tried to kill him in a fire once.
I wished that he should be a priest.  You see?
He is a priest.”   Her great triumphant eyes
sparkled with love; her motherly, small hands
moved exquisitely toward the bent old man.

“When he was twenty-three and in the army,
he said my Little Hours every day,
He fell asleep and, when he woke, his fingers
were at the end.  He thought he had said all
and slept again.  And that is what I wanted!
I turned the leaves and moved your fingers for you.”
“I was a simpleton.”  They smiled together.

“Now let’s consider how your days are spent,
my child – you haven’t heard that ever, have you?
And that’s all right.  What interests me more
is that for seventeen years, more or less
you haven’t gone to bed before midnight
seventeen times.  And you are on your feet
by five each morning.  We love abnegation
my Son and I, when it forgets itself.
You say Mass well – but still you do not ask
nearly enough.  Ask for much more.”  Her eyes
looked straight at him, looked through him and beyond
to lands where no cross stood.  Her gaze returned

and rested on his surplice – “Now that lace ...”
She touched it.  “Imitation, as I thought.”
That did not bother him; somehow he felt
comforted.  He knew she was not fussy,
she liked things well done, that was all.  The chancel
should have been washed a month ago at least
and he would do it if Germaine did not.

“Listen,” her hands were lifted, “I give always,
my Son and I, we are not hard to please.
Leave all to me.  The people must do penance
or war will come again.  There must be order.
Marriage must be inviolate.”  She wept.
Yet soon she said: “My child, if God in anger
should smash the world to pieces, I would gather
the fragments up and take them back to Him.
Do you know that?”  Her eyes blazed love and pity
*  *  *
Later a sculptress made a statue of her;
the head was bowed “to be more mystical.”
“My dear,” said Père Lamy, “you have it wrong.
She is not mystical at all.  She looks you
straight in the eye ...  “

The old curé is dead now.
Those who receive help through his intercession[1]
are earnestly entreated to inform
Monsieur le Curé de Saint Lucien.

[1] Sister Jeremy here suggests that Père Lamy, having lived a saintly, exemplary life, may be raised to sainthood, provided proof can be given that through his intercession spiritual and material blessings have been obtained from God.

Posted by Catherine at 3:50 AM No comments: