THE TOMB OF MARY AT MURREE

ACCORDING TO LOCAL TRADITION HANDED DOWN FROM GENERATION TO GENERATION IN MURREE, MARY OF NAZARETH DIED ON THE WAY TO KASHMIR AS SHE ACCOMPANIED THOMAS ON THIS MISSIONARY ENDEAVOR.
Mary died at Murree; some believe that the name is a reference to Mary.
In the 1850's the name was still expressed as Mari.
Mari and Murree may have derived from 'Mariam' or Mary.
The Marian Shrine is believed to be where Mary was laid to rest. The site has been maintained and honored as far back as anyone can remember.
Since ancient times, Hindus had worshipped at the resting place, and Muslims paid homage on Thursdays by lighting earthen lamps filled with oil.*
The tomb itself lies east-west, oriented in Judaic custom. The resting place is known as Pindi Point.
The sepulchre is named Mai Mari de Asthan, meaning Resting Place of Mother Mary.

A document about the tomb (dated 30 July 1917), archived in file number 118 of the Muree Municipal Council tells that in times of drought, prayers and offerings at the tomb have generally succeeded in bringing rain.
Signs and wonders have been experienced by many both at the tomb, and in the vicinity.

Mary has brought such blessing to our world through the Incarnation of Jesus.
May we honor her life and her gentleness in caring for Jesus, and bringing blessings in the Marian Shrine town.

Mary of Nazareth in the Scriptures 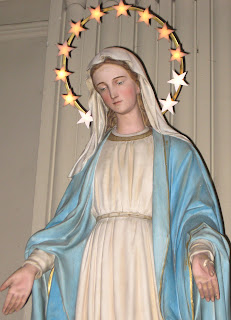 Luky;
A scrutiny of those references to Mary of Nazareth that exist in the Holy Scriptures provide an insight, not only into her personality, but even into the relationship she shared with her Son.

The first book of the Bible, Genesis, contains a description of the fall of Adam and Eve. Here also the first text applicable to Mary of Nazareth may be found. God warns the serpent, saying:
I will put enmity between you and the woman,
and between your offspring and hers;
he shall crush your head, and you will strike his heel.
(The Torah, the Old Testament,  Book of Genesis, Chapter 3, verse 15).

The simple brevity of this text does not conceal the depth of its meaning. Though at first sight the "woman" mentioned appears to be Eve, it is Jesus Christ, offspring of Mary, who will bruise the serpent's head by destruction of the serpent's power. Hence the passage is seen as forecasting the fact that Mary of Nazareth will step into the role of mother of humanity, a theme much employed in English poetry.

Like Genesis, the final book of the Bible, the Book of Revelation refers to Mary of Nazareth in the statement:

And a great sign appeared in heaven: a woman clothed with
the sun, and the moon under her feet, and on her head a
crown of twelve stars ... And being with child, she cried,
travailing in birth: and she was in pain to be delivered ...
And she brought forth a man child, who was to rule all
nations with an iron rod. And her son was taken up to God and to his throne.  ( New Testament, Book of Revelation Chapter 12, verses 1 and 2, and verse 5).

In Chapter 12 verse 9 there is a reference to

The great dragon ... that ancient serpent called the devil, or satan, who leads the whole world astray.

The depiction of satan in the guise of a dragon emphasises the antagonism that exists between satan and Mary of Nazareth, whose offspring he sought to destroy. That this animosity is not confined to Mary and her Son Jesus but includes all of humanity is asserted in these words;

Then the dragon was enraged at the woman and went off to make war against the rest of her offspring - those who obey God's commandments and hold to the testimony of Jesus. (New Testament, Book of Revelation Chapter 12, verse 17).


Posted by Catherine at 2:24 PM No comments: 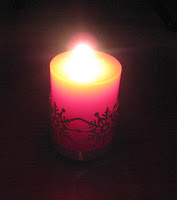 Lumiere Charity remembers those who have been affected in the passenger trains collision in Amsterdam. Our thoughts are with all those who have been injured, for their families and for all who have assisted in caring for the injured. A lit candle has been burning in remembrance for the Netherlands.
Posted by Catherine at 4:31 PM No comments: 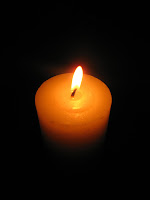 Dear Readers,
Lumiere Charity remembers those who have died in the airline crash in Pakistan. Our sincere sympathies go to all their grieving families. Our thoughts are with those who assisted the afflicted.A lit candle has been burning in remembrance of all who have suffered in this tragedy.
Posted by Catherine at 3:39 PM No comments:

Literature is the product of the pen 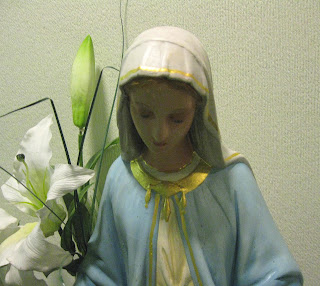 Luky;
Literature, being the product of the pen of a living, breathing human being, relies for its existence on trends of style and behaviour current among the members of the generation for whom it is composed. Such trends, once they have been encompassed by the writer, are incorporated into the text before being transmitted to the reader. Though subtly modified by the writer's individual stance, the text would nonetheless normally be expected to reflect the prevailing customs and beliefs of the era. Some of these beliefs and customs may since have perished. However, a study of English poetry from its earliest traceable beginnings until the present reveals that composition of poetry in veneration of Mary of Nazareth was practised almost continually until the second half of the twentieth century.

Therefore, though it is perceived as having currently encountered an obstruction - as in fact it has intermittently done before - it has persisted for well over a millennium, notwithstanding the fact that the idiom may have changed somewhat along the way.It may be presumed that the manuscripts that have survived the centuries owe their continued availability to the fact that the civilisations which preserved them for posterity deemed them both worthy of conservation and representative of the most commonly-held views of their epoch.

The tenor of the poetry in honour of Mary that has come down to us from Anglo-Saxon times indicates that even at that time hyperdulia was a prominent part of the religious customs of the English Christian, showing the prophecy of the Virgin that all generations would call her blessed to have been fulfilled in England - and consequently in the countries where English is used as the medium of speech and writing - by means of Marian poetry. The sheer volume of surviving examples of this poetic genre in English alone is a sign that Mary of Nazareth held a place of honour in the hearts of the earlier generations of English Christians. They refer to her as "Our Lady" and to their country as "Mary's Dowry".

A selection from poets whose work includes poetry in praise of Mary produces some interesting quotations. In Christ I, the Virgin Mary is addressed as a maiden ring-adorned who will thus send/heaven-homeward with ever pure heart/her bright treasure. St. Godric in the twelfth century calls her: Cristes bur/Maidenes clenhad, moderes flur
[chamber/bower of Christ, virgin among maidens, flower of motherhood]. She is named Our blisful lady, Cristes moder dere by Chaucer and Spice, flowr delice of paradise/That baire the glorius graine [spice, fleur-de-lis of paradise/that bore the glorious seed] by William Dunbar.

In his poem Nativitie, John Donne (1573-1631) speaks of her deare wombe in which immensitie (is) cloysterd. The poet William Wordsworth (1770-1850) hails Mary as Woman above all women glorified/our tainted nature's solitary boast.
Gerard Manley Hopkins (1844-1889) addresses Mary as his wild web, wondrous robe, while Coventry Patmore (1823-1896) asks whether Joseph's sisters wondered what their brother could see in a mild silent little maid like (Mary).
Hilaire Belloc (1870-1953) in Ballade of Illegal Oranaments in the twentieth century requests Prince Jesus to bestow on him, when departing from this earth, the privilege ...to see/A Female Figure with a Child.

The poet Francis Thompson (1859-1907) in his Essay on Shelley wrote of the days when poetry was "the lesser sister and helpmate of the Church; the minister to the mind, as the Church was to the soul". A renascence of inspired poetry was taking place at the time as, like Thompson himself, poets of the calibre of Keble, Newman, the Rossettis and Hopkins, to mention but a few, were using their talents to praise and honour the Creator.

*Photograph taken with permission by Rev. Catherine
Posted by Catherine at 6:14 PM No comments:

Poets and the Praise of Mary 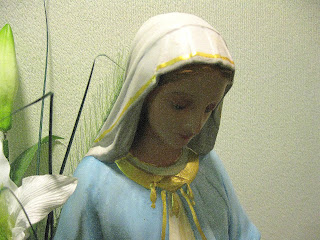 The  Magnificat, Cynewulf and Godric
No other woman in history has inspired a proliferation of hymns of praise such as the vast mass of poetry dedicated to the Virgin Mary by successive generations of poets. This is a remarkable phenomenon, given the scant information available about this young Jewish woman of Nazareth, betrothed to a carpenter, who, while remaining a virgin, gave birth to the Lord Jesus Christ. He is regarded by the millions of Christians born during the centuries that have elapsed since His Birth, as the Son of God, the Messiah, whose arrival had for thousands of years been eagerly anticipated.

The texts pertaining to Mary in the New Testament depict her as a woman of few words, who, though she participated actively in her Son's Life from the instant of His Conception until He gave up His Spirit, nonetheless knew her role to be a supportive and sustaining one, rather than one of taking charge. No poet who recognises this distinction would give Mary more honour than is her due.

Mary from Nazareth delivered an impromptu oration of such confounding magnitude that it has irreversibly secured her position among the world's foremost women orators. The oration is known as the Magnificat, on account of the introductory line in the Latin translation: "Magnificat anima mea Dominum" [my soul glorifies the Lord]. In her recital, Mary predicts that her name will be on the lips of the people of every generation to come (Luke 1;48), as she proclaims:
...Because He hath regarded the humility of His handmaid: for
behold from henceforth all generations shall call me blessed.

English poetry abounds with confirmation of the fulfilment of these prophetic words of a hitherto undistinguished Jewish woman. So engrained is the praise of Mary in the ethos of early English Christianity that Cynewulf's poem Christ II, one of the earliest extant Anglo-Saxon poems, which dates back to approximately the ninth century AD, contains a passage in honour of the Virgin Mary, while the first known English mediaeval lyric is St. Godric's A Cry to Mary, composed about the mid-twelfth century.

*Photograph taken with permission by Rev. Catherine
Posted by Catherine at 5:09 PM No comments:

Happy Easter to all 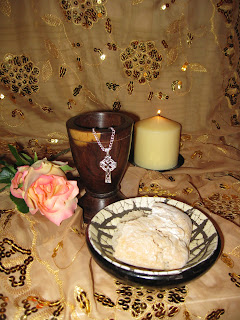 May the blessings of the Risen
Easter Christ be yours. A candle
has been lit for all
Lumiere Charity readers
at this time of
hope & renewal

*Photograph was taken by Rev. Catherine. Please
feel free to use copyright free for any
educational or spiritual purpose
Posted by Catherine at 2:37 PM No comments: